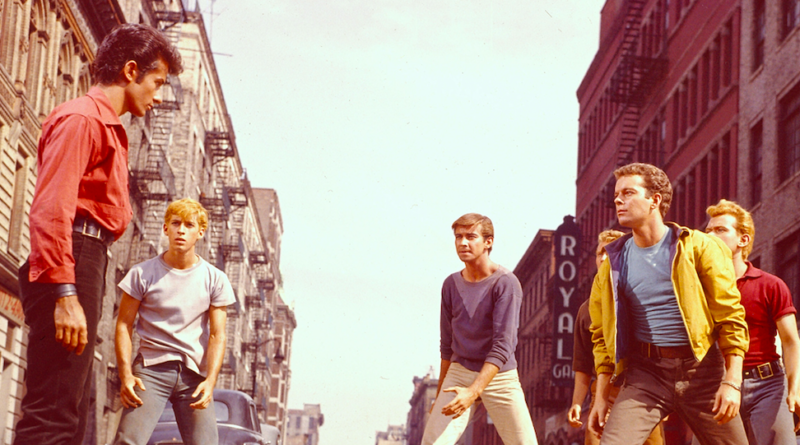 Photo: George Chakiris and Russ Tamblyn star in West Side Story, which is part of the TCM Classic Film Festival. Photo courtesy of TCM / Provided with permission.

The 2021 TCM Classic Film Festival returns May 6-9, this time with virtual presentations on TCM and HBO Max. One of the highlights of the multi-day programming is a celebration of the 60th anniversary of the Oscar-winning movie musical West Side Story, starring Natalie Wood, Rita Moreno, George Chakiris, Russ Tamblyn and Richard Beymer. The beloved film will screen Thursday, May 6 at 8 p.m. and feature a conversation with Moreno, Chakiris, Tamblyn and TCM host Ben Mankiewicz.

The landmark feature, directed by Robert Wise and Jerome Robbins, is an adaptation of the successful stage version, which itself was an updating of the classic Romeo and Juliet tale by William Shakespeare. In 2021, the movie holds up, mostly because its themes are still so powerful. Perhaps that’s the reason Steven Spielberg felt compelled to direct his own take, which is due in theaters later this year.

Recently Chakiris, an Oscar winner for the film, joined with his co-star Tamblyn and Mankiewicz to talk about West Side Story and the upcoming film festival. In the movie, Chakiris plays Bernardo, leader of the Sharks, while Tamblyn is on the other side of the rivalry, playing Riff, leader of the Jets.

Here’s what they told Hollywood Soapbox …

CHAKIRIS: Well, I think obviously the film has been important all this time. It keeps its importance, first of all, because it’s based on a classic story that has been a classic for many, many, many decades, so the story itself is very relevant in today’s society as well. And I think that’s one of the reasons why audiences have responded to it over the years.

TAMBLYN: George and I were just talking on the phone yesterday, I guess, and … he said, ‘Do you know of any other film … that’s really been celebrated so much for so long and still being celebrated,’ which I thought was interesting. I couldn’t think of anything other than maybe The Wizard of Oz or something that they keep showing every year. But West Side Story, certainly our version, has certainly been shown a lot, and I think that when Steven Spielberg’s version comes out, it’ll be shown even more. People will say, ‘Well, let’s go back and see the first one again,’ so I think we’re just going to go on and on and on, hopefully.

MANKIEWICZ: I think, of course, these guys are right. They were there, and they have a keen understanding of what made it different. I know that you’ll see in the conversation that we have with both these two guys and with Rita, they knew something special was going on. But there’s no way to know when you’re making a movie, and I know these guys would say this, you don’t think we’re going to be sitting around talking about it 60 years later. Who knows what happens?

You get this magic that comes together, the chemistry on screen, obviously the direction from Robert Wise and those dance numbers from Jerry Robbins, and the music. It all comes together. It’s this feeling. … They’re thrilled, it’s an adventure, and they’re excited, and there’s danger, and there’s romance. It’s got everything, and there’s this sense that you’re watching people lead these thrilling lives, and it stays with you. Whatever that magic is obviously if we couldn’t answer that question then it would get replicated by producer and director after producer and director. You can’t, and these guys managed to be part of something that was this special in large part because they were part of it. …

When Rita and George and Russ were there for our conversation, which we’ll have on opening night this week, you’re like, wow, you guys aren’t faking it. You’re friends. You guys really do like each other, and I think that matters. I think [because] they have been such passionate advocates for this film for the last 60 years, eager to talk about it, is a big reason why it’s still so relevant and important and feels so fresh today.

On the camaraderie of the cast members …

TAMBLYN: George and I have actually spent more time together after the movie than we did on it. … Seems like forever, but we’ve done a lot of conventions together and a lot of different projects, so we’ve gotten to know each other really well in that period of time. … We were not so friendly on the movie because Jerry Robbins liked the idea of keeping the gangs apart, and, of course, George and I stayed apart, except for when we were fighting or yelling at each other, mainly me doing the yelling.

CHAKIRIS: It reminds me that Bob Wise, after the movie was made, the girls used to get together with Bob and take him to lunch, and they kept doing it. And Bob actually said, ‘It was the first time in his experience of moving-making that he had retained such close friendships with people in the movie after the movie was over,’ so even for Bob it was a special happening because the film just brought us close together.”

West Side Story is the opening night feature of the TCM Classic Film Festival. The movie will run, along with a conversation between Ben Mankiewicz and cast members, Thursday, May 6 at 8 p.m. Click here for more information.