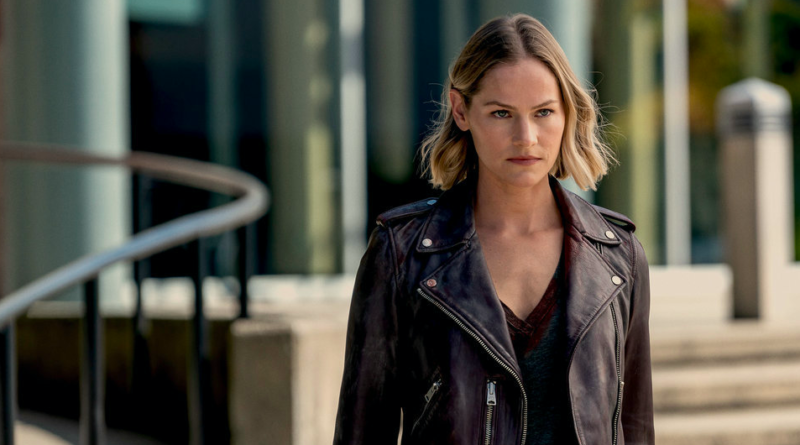 For the past five years, Kelly Overton has been portraying the title character on the successful Syfy series Van Helsing, and now her journey with the role is coming to an end. The network will air three back-to-back-to-back episodes Friday, June 18, starting at 8 p.m., followed by the series finale, which is set for Friday, June 25 at 10 p.m.

“It’s been a wild ride,” Overton said in a recent phone interview. “It’s been an amazing five years, and this is the longest run on a show I’ve ever had. And you really just fall in love with the character and the people, and when you’re in it, you’re so happy you got another year. You hope it will never end, and when it does, it’s definitely bittersweet. It’s been such a big part of my career, so it feels like a big deal.”

Van Helsing is a vampire tale set in the near future, and much like Bram Stoker’s original story Dracula, a Van Helsing family member is the last hope for humanity. This time around, it’s Vanessa who has been tasked with saving the world. Why her in particular? Well, she has special blood that can reverse a vampire’s bite, essentially changing a vampire back into a human. Naturally this means she must fight — and fight hard — against the vampires, and along the way, she also searches for and finds her daughter in the apocalyptic melee, according to the show’s official website.

Overton came to the role after starring alongside Sean Bean in Legend season two for TNT.

“We had just finished shooting that and had just gotten word that it wasn’t going to go for another year, so I was available,” the actor remembers. “And Van Helsing was the first script that I got for that pilot season, and so it was the first script that I read. And I fell in love with it instantly. I thought, oh my goodness, this has all the components that get me really excited and passionate. It had all the action, which I had done. My career has been made up of some action stuff here and there with Tekken and even in True Blood, but being an athlete my whole life, it was always a dream to have both of those passions working together. So when I read that it was an action show and that it was the title character, I was very, very interested, and then once I got into the script and learned that at the heart was this mother’s journey, that just sold me. At the time, I had almost a 2-year-old, so I was a new mother. And that just really resonated with me.”

When Overton found out that Van Helsing would not be continuing past its fifth season, she was left wanting more, but also quite happy that she was able to bring the title character through a complete arc. Many shows don’t make it past the first season, so it was something of a miracle to make it to year five.

“You’re always left wanting more when you’re playing such a great role like Vanessa, but, yeah, I’m really happy with the way it started and the journey she went on,” she said. “And I’m really satisfied and pleased with the way it ends. … My hope is that there will be just a deep sense of closure and that the fans will come away after having been on this journey for five years feeling satisfied. It’s a vampire show. We never lost sight of that, and the sci-fi elements have always been really fun for us to do. But I think what made this show so special is that it always from day one had a lot of heart, and everybody that came on board tried to make it a little more than just a vampire show. And I think the fans saw that and appreciated that, so my hope is that those fans that stuck through it for five years will just feel really satisfied at the end of this journey.”

Being as involved in the show as she was, Overton had inside knowledge on where the character was headed. She wasn’t completely surprised when she found out the fifth season would be the last. An actor with her résumé knows the ins and outs of the business, and it appeared to be time to hang up the weapons once and for all.

“For it to have gone five years is a really big accomplishment,” Overton said. “I think for not just any TV show these days but for the genre and I know that for everybody involved, it was a big deal, not just for the actors but for the producers as well. So the fact that it went five years felt like a miracle and amazing in and of itself. At the same time, you never want it to end. At the same time, there’s so much more we could have done. When you enjoy working with the people you work with, you want to keep exploring certain relationships and certain characters. It was hard to know that it was going to be over, but also I was prepared.”

She added: “I think everybody felt just a really deep sense of accomplishment that we had made it to the end of a season that we didn’t know if we were going to have the opportunity to finish [because of COVID-19], and it was tough. We were so close to putting a button on this show, and if we didn’t get the opportunity, that would be such a shame. And we did. The producers did a fantastic job of taking care of the crew and the cast, and making sure that the right protocols were in place to keep everybody safe at such a crazy time with the coronavirus. We were all very pleasantly surprised and super thankful that we were one of the first shows to have completed filming without any outbreaks, so there was a lot of accomplishment that we experienced on that last day. … We made it through the season without having to shut down production, so there was a big sense of accomplishment. It was very emotional, especially for me, too. I was one of the only American actors involved. It was primarily a Canadian show, so I don’t get to see the people that I worked with on a regular basis. They’re kind of all up there in Vancouver, and a lot of them get to work together again. So I knew that it was going to be goodbye for a minute, so that made it extra special for me.”