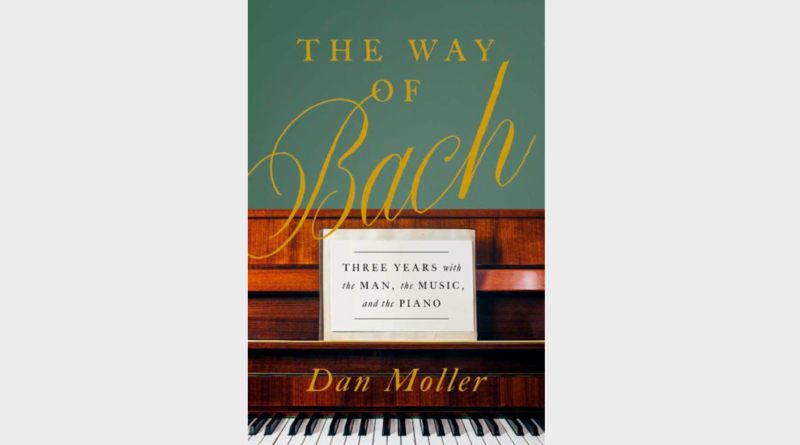 Dan Moller’s journey to better understand the music and influence of Bach is a welcome one, filled with humorous commentary on the legacy of the legendary composer and how a pianist might approach some of his best-known works. As Moller describes in the beginning of his short book, this is not a Bach biography or Bach how-to book, and some purists may even be turned off by his unique approach. Instead, The Way of Bach, which is available now from Pegasus Books, feels like an enjoyable series of essays, detailing exactly what the subtitle promises: the man, the music, the piano. One should also add in: Dan Moller.

Moller, who makes his living as a philosophy professor, comes off as a Bach enthusiast, and he doesn’t mince words when comparing the composer’s output to other icons of classical music (he has especially harsh words for Beethoven, but this reviewer believed the tongue was firmly planted in the cheek for those comments and others like them). He is enamored of Bach’s The Well-Tempered Clavier, St. Matthew Passion, Goldberg Variations and a series of other works, including The Art of Fugue.

Each piece is described with an exacting detail featuring winsome metaphors that reveal a little of Moller’s personal tastes outside the world of classical music (he returns a few times to Metallica’s music, for example, and there’s even an Iron Maiden reference). The composer’s oeuvre has never been described quite this way, and that makes The Way of Bach highly unique, readable and fascinating. There’s a lot of “inside baseball” jargon that will satisfy pianists, but there’s also an accessibility to these words that renders the text understandable for a general audience. This reviewer is not a pianist but frequents philharmonic performances, at least in the pre-COVID-19 era. It was easy to follow along with the sometimes dense descriptions, and whenever a stumbling block occurred involving a word or section, a helpful glossary at the back of the book proved to be an appreciated guide.

Some of the anecdotes that Moller focuses on from Bach’s personal and professional life are interesting to read. He has a wonderful detailing of what he imagined life in the Bach household was like (unpaid bills, screaming children, work on music for Sunday services), and there’s a revealing story about Bach auditioning to replace a well-known organist, an exercise that didn’t end well for the composer and perhaps revealed the ulterior motives of the church at the time. A highlight is surely the letters Bach wrote to be properly paid for his services (one even made its way to the King of Poland).

There is a my-way-or-the-highway feel to some of the assertions in The Way of Bach, and occasionally this can be oft-putting. That’s one of the realities of any commentary-based book: assumptions are made, and there’s not much allowance for competing viewpoints. With that in mind, if the reader treats Moller’s 200 pages as an exercise in devotion, deconstruction and distraction, no disappointment will seep in. This is as much a comedic text as it is a treatise on a composer — just don’t use the word genius, and readers will be fine.

A common theme throughout these pages is Moller’s physical pain when playing the piano. In the opening chapters he describes how practice, practice, practice (a necessity for Bach music) has brought him a great deal of discomfort, and he needed to augment his schedule and find work-arounds to play the music.

One might ask why he needed to play Bach’s music in the first place, especially if it brought about frustration and physical pain. He found the composer on a fluke when he was a child and a recording on vinyl caught his attention. Since then, he has become a Bach appreciator and defender, finding beauty in the seeming simplicity of the music and endless wonderment in the obvious complexity. He became a student of counterpoint and set out to effectively interpret some of the compositions, with the help of a childhood friend he would text every so often for piano guidance and a helpful quip. As he chased his goal, over the course of three years, he found ever more reasons to fall in love with the music (and he even welcomed comparative selections by Mozart and Wagner along the way).

In some regards, The Way of Bach is about savoring the journey of musical exploration, much more than pure mastery, if that can even be achieved. Perhaps, Moller writes, it is enough to attempt the summit because at least that attempt comes with confirmation that the highest peak exists in the first place.

The Way of Bach: Three Years with the Man, the Music, and the Piano by Dan Moller. Pegasus Books. 224 pages. $28. Click here for more information.