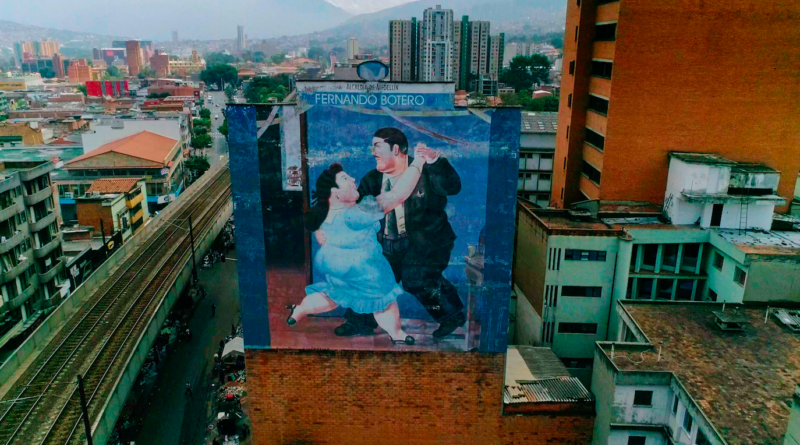 Photo: Botero is a new documentary that looks at the life and work of Fernando Botero. Photo courtesy of Corinth Films / Provided by press rep with permission.

Artist Fernando Botero, originally from Colombia, has gained so much popularity and fame throughout the many decades of his career that some believe him to be the greatest (and most well-known) living artist in the world today. His unique style, which features exaggerated, plump-like renderings of humans and animals, is unmistakably unique and instantly recognizable. His bronze statues dot plazas and avenues around the globe, and his modern-art paintings grace the walls of many museums, including two he endowed in Colombia.

The new documentary Botero takes a inquiring and largely celebratory look at the octogenarian’s life and career. The artist himself is interviewed at length, in addition to his three children, curators, authors and art experts. The consensus, with only a few detractors, is that Botero helped put Latin American art on the map and his style, which he has stuck to for many years, is both unique and seemingly free from external art movements. In some ways a Botero painting or sculpture stands by itself, not easily categorizable and not easily complementary to his peers.

The documentary is structured largely in a chronological order, with time spent on his upbringing, his first marriage, the raising of his children, the death of a young child and his entry into the art world. Inspiration struck when he drew a mandolin still life with a hefty bulk, and Botero saw something different in the undulating curves, perhaps the future of what his art could become.

From that foundational painting, he ventured down a path of drawing mostly human figures with voluptuous curves, commanding proportions and almost comical dimensions. He often offered his fans variations on much-loved artistic masterpieces, including Botero-ized renditions of Leonardo da Vinci’s “Mona Lisa,” which caught the attention of the Museum of Modern Art in New York City and helped cement the artist’s burgeoning reputation.

His sculpture work, chiefly accomplished in his studio in Tuscany, Italy, is a prominent part of the narrative — ditto for his series on the Abu Ghraib atrocities, a traveling circus and bullfighting. His “periods,” if one can call them that, differ less according to style and more according to content. His renderings have remained largely the same, but what he decides to create on the canvas or shape in a bronze has dramatically changed over the years.

The parts of the documentary about Botero’s relationship with his native Colombia are vastly interesting. He has not lived in the country for many, many years (he moved to New York City, Paris, Monaco and Italy), but his connection to Bogotá and Medellín, Colombia, are still strong. So much so that he has donated many of his pieces to museums in both cities, in addition to his entire private collection of art by other masters.

One touching episode in the doc, which is now available to stream virtually, involves a dove bronze that was bombed in Medellín — another casualty in that city’s violent past involving the drug cartels and Pablo Escobar. Rather than discard the damaged statue, Botero insisted the charred, ripped-apart dove stay in its place, and nearby, he placed a second dove, in its full majesty. The parallel between the past violence and the present peace is stirring.

The film, directed by Don Millar, is perhaps too laudatory of the so-called Maestro. As an artist, Botero is undeniably talented and unquestionably successful (my god, that Tuscan villa and that studio in Monaco!), but there is a real debate that can occur about the power and progress of his work. One sole negative voice is presented in a couple quick passages (Botero’s work is likened to the Pillsbury Doughboy), but that’s about it. So the film is less a critical, academic investigation of Botero’s influence, and more of a historical, contemplative peering into his life and influence. This shift toward the celebratory sits well with me — but I count myself a fan of the Maestro.

Botero is a fascinating portrait of a great contemporary artist. The documentary fills in many blanks about the man, the work and that exaggerated style.