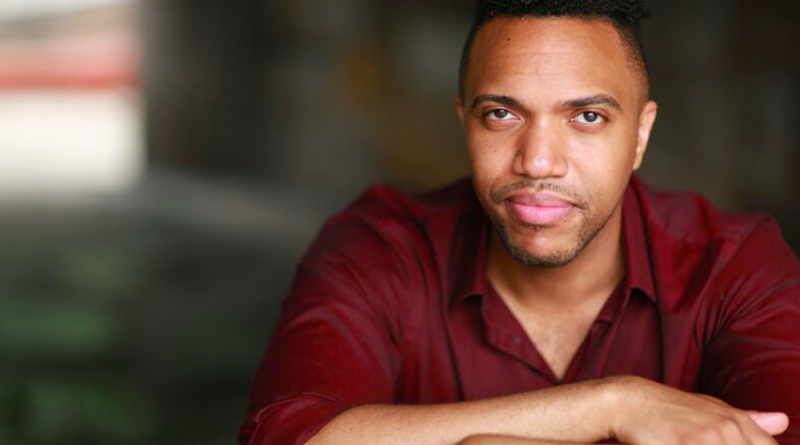 William Shakespeare’s famous history play, Julius Caesar, has seen many productions throughout its long history, and with each new generation, there’s a novel interpretation of the murderous tale involving Brutus, Antony, Cassius and the title character. In 2021, perhaps the modern-day tie-in is the global pandemic, especially because theatrical productions have been relegated to virtual platforms.

Enter Shakespeare@, the company that is based in Jersey City, New Jersey. They ceased all in-person performances and instead have staged a few radio productions of the Bard’s famous plays (under the clever name Shakespeare@ Home). Episode two of their Julius Caesar posted today, March 1, with the third part coming Monday, March 8. Listeners can catch up on the historical drama at any time.

Recently Hollywood Soapbox exchanged emails with Barbour, who recently made his Broadway debut in The Inheritance. He also previously appeared in Julius Caesar with Theatre for a New Audience. In this production, he takes on the central role of Brutus. Questions and answers have been slightly edited for style.

How different was performing in an audio production versus an in-person production?

It’s a very strange experience, especially because while we were doing the recording we didn’t also use Zoom or any sort of visual platform. As theater actors, you come to rely on another body in space reacting not only to the physical presence of another body, but playing off the tacit language that is facial communication. When you take away all of those elements and restrict your acting to aural work it can feel very disorienting at first. But ultimately, it was so illuminating to get to simply work with the voice. And that is especially true when performing Shakespeare, whose language is so musical and lyrical in nature. It makes you really focus on the words and make sure that you convey meaning and emotion using only your voice as your tool. And on top of that, it makes you really truly listen to your fellow actors, which is not always an easy thing to do. While I deeply miss the in-person experience, there is something very intimate and powerful about just having the voice and a soundscape to tell the story. It makes you listen and consume the work in a completely different way.

How do you approach the character of Brutus? What’s your take on this iconic character?

I’ve had the great fortune of getting to do this play three times now. The last two times were actually the same production, which I performed in first at the Oregon Shakespeare Festival and then again Off-Broadway at Theater for a New Audience. In both those instances I played Mark Antony who is such a different character because he wears his heart on his sleeve through the entire play, even when he’s being duplicitous.

Brutus is very different. He’s guarded. He’s very quiet, very pensive and constantly having an internal struggle over what is best for the people of Rome. Maintaining that tension is very difficult when your voice is the only tool you have at your disposal. So, what I tried to do was maintain that sense of stoicism that the character is known for, while balancing the fragile and deeply feeling human being under the surface.

And Sean Hagerty was great in directing me as to when I can let the cracks on his stoic surface appear. It was important finding those few key moments when the senator and soldier go away, and the flawed and fragile human being comes forth. I tried to remember that this is a man who lives by certain ideals, while remembering that like all people, he has flaws. And it was important to make sure that when we see the cracks in the façade, he should be as raw and vulnerable as possible, if only to emphasize how rare such displays of emotion are for Brutus. Politicians, even stoic ones, are just flawed human beings, after all.

From an actor’s perspective, what do you love about performing the words of William Shakespeare?

I was actually trained as a classical singer before I ventured more into the world of Shakespeare and classical theater. And what I have been most surprised by is the musicality of the language. There’s a lyrical flow to a Shakespearean soliloquy that easily rivals any great aria by Mozart. What I love is letting go of my preconceptions about the language and approaching the words like you would a piece of music.

Making sure you understood the intention of the words, for sure. But also making you understands the lyrical line of the meter. How each line flows into the next like a great piece of music. I also think the mistake many actors make when approaching Shakespeare is feeling the need to muscle one’s way through the speeches. When, in fact, like singing, the speeches work much more smoothly the less you try to force it. You have to let the words work for you.

People often get intimidated by a great role and feel the need to put their ‘stamp’ on the character. There are far too many brilliant actors in history who have put their ‘stamp’ on Brutus for me to think that I can reinvent the wheel by playing this part. And the great thing about realizing that is that once you let that pressure go, you let the language find you and you start having a conversation with the character. And you understand that, like any role, the best thing you can do is find yourself in it and stop trying to force it to be something it’s not. Because then the role truly is yours, and only then does it have your ‘stamp.’ And let’s be real, Shakespeare already did all the hard work. You just have to let go and trust him.

How difficult has the COVID-19 pandemic been from a professional standpoint?

I’ll be honest. It’s been extremely difficult. Many industries have been hit hard as a result of the shutdown, but theaters have basically disappeared. The very thing that theater is built around — coming together in a communal space — is precisely what we can’t do right now, and for someone who has dedicated his life to the theater, that is devastating. It’s created a bit of a void in my life, in many of our lives, and forced us to question who we are and what we do.

There have been many valiant efforts to keep the theater alive through this crisis. Through Zoom readings, innovate digital works and podcasting; we have kept the spirit of the theater going. But I’d be lying if I said this hasn’t been a very difficult and depressing year. What has been exciting to witness has been the inventiveness and creativity people have brought to our new platforms, and I am certainly including Shakespeare@ Home artistic director Sean Hagerty and the whole creative team behind this project. Theater artists are resourceful and stubborn. And we will always find a way to continue making art, even in dire circumstances like these. And I’m excited to see how the art form continues to evolve and adapt to new media and a new market as a result of what this year has been.

You were performing in The Inheritance when the pandemic hit, and if memory serves, your final performances were cut short. What was that experience like?

It was pretty surreal. We were scheduled to close four days after the shutdown. So, we were just beginning to say our goodbyes and gearing up for what was already going to be a very emotional week. But then everything ended abruptly. We were told to clean out our dressing rooms and say whatever goodbyes we could to whomever we could. There are still some people from that show I haven’t been able to give a hug and say goodbye to, and that’s heartbreaking to me, as those little rituals around closing a show are an integral part to getting closure and moving forward.

Ending a show is already a difficult and mournful experience. What was so strange was that we never really got to have that cathartic signing off. But I’m thankful at least that we weren’t cut short in the middle of a much longer or open-ended run. I think that would have been far more devastating. And my heart goes out to all my fellow actors and artists for whom that was their experience. The silver lining of it all is that the New York Performing Arts Library, which captures shows for posterity, ended up recording what turned out to be our very last show. And that’s pretty special. Had theaters been shut down one day earlier, that wouldn’t have happened. So, I’m very thankful we at least got to have that.

What do you hope for in the future — both personally and professionally?

Honestly, I just want to feel like an artist again. The life of an artist is full of ups and downs, ebbs and flows, highs and lows. Sadly, mostly the downs, ebbs, and lows have characterized the last year. I never realized how much I would miss the communal experience of creating a show with a group of artists and then sharing that work with an audience.

I miss human connection. We’ve all had to survive in pods this year, and I am so thankful that I have had a loving and supportive pod that has gotten me through these difficult times. But I miss my community. I miss my friends. And I miss my work. But my sincere hope is that we will all emerge from this year with a greater appreciation for the uniquely communal experience that is going to the theater. I hope we will find more inventive ways to democratize ticket prices, include a greater variety of stories, and keep the theater a sacred space where we share stories and develop a deeper understanding of our fellow humans. I truly believe that theater is what binds us, theater is what heals us, and theater is what will ultimately save us.