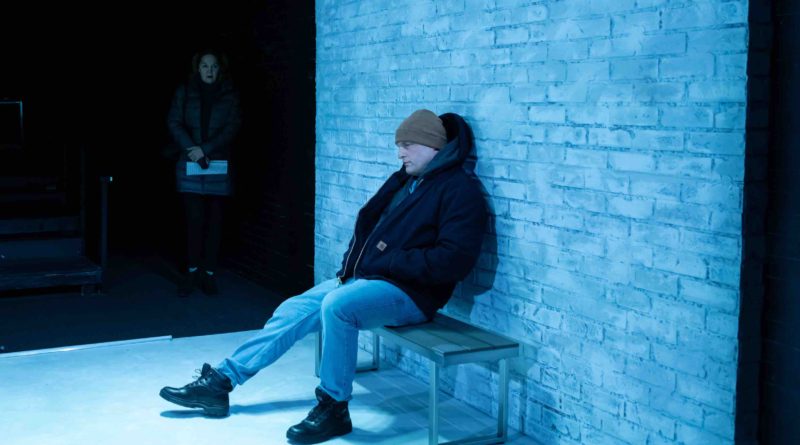 Scott Organ’s new play, 17 Minutes, delicately deals with the aftermath of gun violence in a small community. It’s a difficult story to tell, but one that is unfortunately told again and again throughout the United States. Organ’s drama is a direct response to the news headlines and daily realities of a society stuck in a seemingly never-ending cycle of hurt and anguish.

The show, presented by The Barrow Group, is currently in previews and opens Jan. 22. Performances run through Feb. 15 at the company’s Mainstage Theatre on West 36th Street in New York City.

Organ’s piece focuses in on a sheriff’s deputy who must psychologically deal with the consequences of a local school shooting. He was on duty during the incident, and what he did (or did not do) throughout the ordeal haunts him to this day.

Recently Hollywood Soapbox exchanged emails with Organ about 17 Minutes. Questions and answers have been slightly edited for style.

Was there a particular incident or story that inspired this play?

I would say many stories have inspired this play. Whenever senseless violence strikes a community, the media is there, but for a brief time. I was interested in what happens next. I was also interested in the complexity of these issues — human fallibility, forgiveness and renewal.

How difficult was it to dive into such a dark, drama-filled issue?

This may sound strange, but I did not find it difficult to work on this play. My goal was always a compelling story that ultimately offered some degree of hope. Knowing that made it easier to dig into some of the darker places in the play.

What do you think the play says about violence in the United States and its repercussions?

I suppose every audience member may have different takeaways about what 17 Minutes says about violence in the United States. Stories on gun violence are frequent and always initially newsworthy. With this play, though, I wanted to focus on the residual, communal and longstanding effects of such an event. Ultimately, I wanted to tell a story about these human beings under these circumstances, not a play about an issue.

Do you feel that the United States is doing enough to prevent school violence?

I wish a director/playwright relationship like this for all playwrights. I have been fortunate to work with Seth numerous times. As a result, we have a common language and a workflow that is just enjoyable. It doesn’t hurt that Seth is a brilliant director who has this singular ability to watch work anew every time he sees it. And just generally, it is wonderful to work at a theater like The Barrow Group where energies are dedicated to serving the story.

When did you realize you had the interest and talent to write plays?

My interest began when I was in college. Playwriting has always appealed to me for a number of reasons. One: it’s a lovely mix of solitude and collaboration. And two: the theater is living art. Every performance is a brand-new living thing comprised of both performer and audience. And that’s pretty cool.

As per talent, I don’t know how to answer that. I’ve written many bad plays. Like many. I guess some playwrights pop out of Zeus’ head, fully formed and brilliant. Not me. I’ve been working on this for a long time, and I can only hope that I am getting better at it.