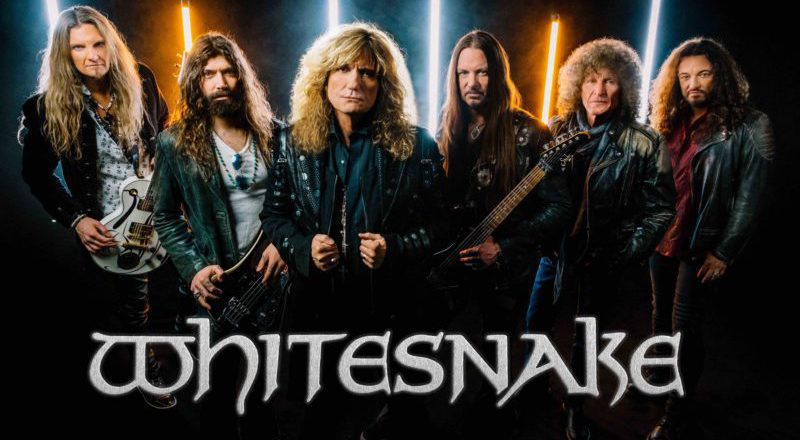 Whitesnake are currently touring the United States on a triple bill with Foreigner and Jason Bonham’s Led Zeppelin Evening, and prominently featured during the hard rock band’s set is guitarist Joel Hoekstra. The musician has been playing music with Whitesnake since 2014, and he likes to keep it busy. During his off time from the David Coverdale-fronted group, he heads off and plays for Trans Siberian Orchestra during their annual Christmas tour and Cher during her comeback gigs around the world.

He’s an accomplished guitarist and a busy, busy man.

As far as Whitesnake, Hoekstra had to join the band the old-fashioned way: audition.

“I kind of fought to get an audition, so as soon as I found out they needed a guitar player, I sent some video links and things like that to [guitarist] Reb Beach, who I had known for years before. And he passed them on to David Coverdale. I didn’t hear anything, and then I thought, well, who would know David. And I happened to think of Phil Carson, Foreigner’s manager, oddly enough, from my time when I filled in for Mick Jones in Foreigner, so Phil was nice enough to reach out to David and get me an audition. That’s kind of the way the story goes, and the audition went really well.”

That was four years ago, and ever since, Hoekstra has been slicing through guitar riffs on such iconic songs as “Bad Boys,” “Is This Love,” “Slide It In,” “Still of the Night” and, of course, “Here I Go Again.” To catch Hoekstra and company on tour, check them out with Foreigner and Bonham Tuesday, July 31 at the Mattress Firm Amphitheatre in Chula Vista, California, and Wednesday, Aug. 1 at the Five Point Amphitheater in Irvine, California. If those don’t work, the hard rockers will headline a string of August dates in Arizona, Nevada and Canada.

“It’s an amazing catalog of songs,” Hoekstra said. “I mean, it’s really nice to play nothing but songs that I enjoy.”

Hoekstra counts himself a typical American listener of Whitesnake’s music. He was sucked in when the band released Slide It In and then proceeded to wear out their self-titled album in 1987.

“That being one of the biggest rock albums of all time really, and then I played a lot of Slip of the Tongue, too, because that was a highly anticipated follow-up to that,” he said. “I was kind of like most, where that was my primary exposure to Whitesnake, and obviously since I’ve gotten the gig, I know the entire catalog.”

As far as his favorites, Hoekstra prefers to spread the love. When the band members play their one-hour set on the triple bill this summer, he’s simply happy to be on stage not thinking about highlights.

“I’m not a big guy for picking favorites,” he said. “I just kind of feel like I’m blessed to be a part of any of it, and my mindset is always to be doing the best job, whether I’m playing a G chord or playing a fast, fiery solo. It’s always just down to doing the very best I can at every moment.”

Part of that “spreading the love” mentality is because of the group of guys on stage with Hoekstra. There’s Coverdale, of course, plus Beach, bassist Michael Devin, drummer Tommy Aldridge and keyboardist Michele Luppi.

“It’s a good mix of guys,” he said. “David, obviously, is rock royalty, but Tommy Aldridge, our drummer, is also quite the rock legend himself. And Reb Beach is a guy who has sold millions of albums, my partner on guitar. We’ve got guys like that who are big rock vets, and then we have guys like myself and Michele Luppi, our keyboard player from Italy, who are just happy to be in the band and excited to be a part of it. A guy like Michael Devin, our bass player, kind of sits somewhere in between all of that. He’s been around in the band for a while, but it’s a good mix of guys. And we all get along really well.”

Whitesnake have been keeping Hoekstra busy throughout the summer months, and that lets him play gigs in Cher’s band and also complete the annual Christmas run with TSO. When the guitarist talks about his schedule, the dates and countries can become dizzying.

“The nice thing right now is I pretty much know when the Whitesnake stuff is going to happen, and they’ve done their very best to steer clear of the TSO time for me,” he said. “So I can continue to be a part of Trans Siberian Orchestra, which is a big part of what I do. I love that gig, and thankfully the Cher gig for now, they’re really not too freaked out when I have to sub it out. So I’m getting, at least for the time being, the first option on all the gigs. And whatever ones I can make, great, and if not, no big deal.”

Hoekstra’s nonstop touring is a testament to his work ethic and history of musicianship. He picked up his first guitar at age 11, after starting out with the cello at 3 and piano at 7. His parents, after all, are classical musicians, so he needed to eat his vegetables.

“They had visions of making me into the young virtuoso or whatever, but at a young age, I really didn’t take to any of it,” he said. “But I’m glad I did it because I think it developed a sense of pitch and a sense of rhythm, and when I eventually did take up guitar, I had a little jumpstart I think on somebody who maybe was just starting guitar at age 11. It really helped my ear.”

A passion project of Hoekstra’s is his personal band Joel Hoekstra’s 13. The debut album, Dying to Live, gathered together some of the guitarist’s friends to jam out and produce a hard rock album on their own terms. He was happy with the results, and who knows, maybe lightning will strike twice and a second recording will come one day.

“I had a few solo albums out years ago that were instrumental, and as I became more well known in this hard rock scene that I’m in, a lot of the fans were like, ‘You should do an album that is hard rock, like vocal stuff that we can listen to,'” he said. “So that was my intention … to have the opportunity to write an album like that more than anything, more than show off with long guitar solos or anything like that, so I just did it with some of my favorite musicians in the classic rock scene: Russell Allen and Jeff Scott Soto on vocals, Vinny Appice on drums, Tony Franklin on bass, and Derek Sherinian on keys. So it was a great opportunity for me to make an album where I did basically all of the writing, the lyrics and the vocal melodies and everything. Haven’t been able to work out a deal for a follow-up … but hopefully maybe someday that will get done.”