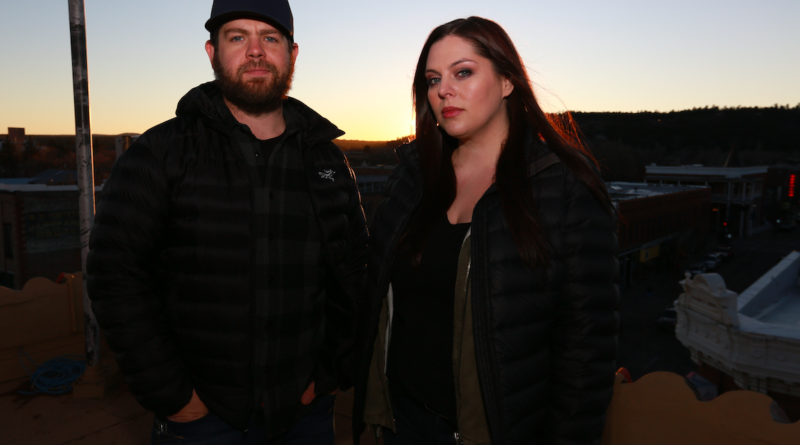 Jack Osbourne and Katrina Weidman, the paranormal-investigating duo behind Portals to Hell, are back with a new set of episodes exclusively on discovery+, Discovery’s new streaming platform. This season, the ghost hunters head to some purportedly scary places in the United States, including the Grant-Humphreys Mansion in Denver; the Stephenson Building in Wymore, Nebraska; and the world-famous Pennhurst Asylum in Spring City, Pennsylvania.

They attempt to explore the dark tales behind these infamous structures and maybe find evidence of a “ghost” or two. Believers and skeptics alike can enjoy the history lessons into these iconic locations. For example, on April 24, the team head to Lancaster, Pennsylvania, to investigate the infamous Fulton Theatre, while the May 1 episode features an examination of the Lake Shawnee Amusement Park in Princeton, West Virginia.

“Travel Channel and now discovery+, they’ve been into paranormal media a long time, so they themselves kind of have a board of places, what show investigated, what location and when, and what season,” Osbourne said. “So there’s a bit of an algorithm you’ve got to punch in to land where we’re going to investigate. With this last run, because of lockdown, it actually opened up a bunch of locations that we would never have been able to get into because of the fact they’re operating businesses, and we require four to five days of having that place exclusively to ourselves. Sometimes that’s just too much for businesses to want to do, so there’s a lot of to-ing and fro-ing, if that makes sense.”

One of the places featured this season that intrigued Weidman was the Grant-Humphreys Mansion and the mystery surrounding the death of its former owner. Weidman was engaged by the history of the location and all the architectural and design details, right down to the Tiffany stained glass.

“It’s amazing to be in a location like that,” she said. “For decades, staff, employees, patrons have been having paranormal experiences there, which is why Jack and I became so interested in it. What caused those experiences? Why? … And we met a couple people there that have some pretty harrowing experiences with the supernatural side of things, so it was definitely an intriguing place to be.”

Weidman’s previous TV credits include Paranormal State on A&E, Paranormal Lockdown on TLC and Destination America, and Real Fear: The Truth Behind the Movies on Chiller. Osbourne has an equally impressive slate of reality and paranormal programming under his belt, including Travel Channel’s The Osbournes Want to Believe and The Osbournes: Night of Terror. He’s also known for Fright Club on discovery+ and, of course, The Osbournes on MTV.

Weidman admitted that she is fairly skeptical when it comes to these so-called “portals to hell,” but she keeps an open mind when investigating. When she and Osbourne pull up to a property, they are not looking to prove or disprove anything. Instead, they try to focus on the people they meet and their stories. Osbourne has similar thoughts.

“I’m 50 percent Fox Mulder, 50 percent Dana Scully,” he said. “There are times when we go to places, and we’re like, ‘No, this is the wind which is causing that.’ Fortunately, we’ve got a really good team of producers that do a lot of great vetting of the clients we’re going to go meet up with because you never want that scenario where you get to the location, and you find that the client is a tinfoil-hat-wearing lunatic.”

Although this new season of episodes features a few first-on-TV investigations, the team also heads to some old haunts on the paranormal circuit, including the Pennhurst Asylum. Weidman said because there’s usually no concrete evidence, they rely more on eyewitness testimonies, which can change throughout time and make an old place feel new again.

“Pennhurst — it’s huge,” Weidman said. “It’s multiple buildings. They’ve been doing renovations for decades at this point, so there’s always new areas being opened up to the public that haven’t been investigated before. So sometimes we are the lucky ones that get to break ground, and sometimes we get to meet up with an investigator or somebody that was there for fun and hear about their experience. And they might be the very first person to have had an experience in that particular area, so I think there’s still lots of room for exploration. And I think there always will be until we have more concrete answers about what this stuff is or what it isn’t.”

Portals to Hell is now streaming on discovery+. Click here for more information.