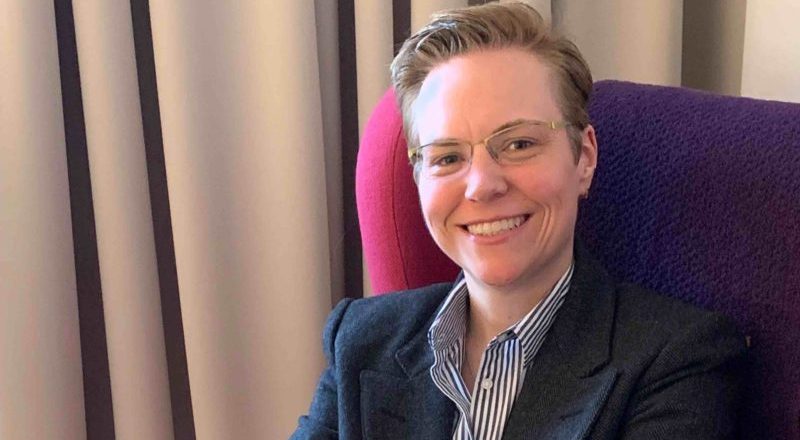 Photo: Cyndy A. Marion is the writer and director of Broken Story. Photo courtesy of the artist / Provided by Emily Owens PR with permission.

Broken Story, the new play from White Horse Theater Company, follows a journalist who travels to Los Angeles to find the true story behind the murder of a famed novelist. The show dives deep into those crime-story staples: alibis checking out, suspects being questioned, doubts being raised.

The journalist in the play, by the name of Jess, has to face some dangerous consequences to her journalistic questioning, and as she travels deeper into the murderous mystery, she realizes that the puzzle pieces are not fitting together.

Recently Hollywood Soapbox exchanged emails with Marion about the new show. For White Horse, she has directed You Are Perfect, A Cavalier for Milady, A Perfect Analysis Given by a Parrot and Eyes for Consuela, among other productions. Questions and answers have been slightly edited for style.

What inspired the idea for this play?

The true story of a mob daughter and novelist who was murdered in Los Angeles. This novelist was shot mob style (a gunshot to the back of the head)  in her home two days before Christmas. While no one has yet been convicted for her murder, the prime suspect remains one of her closest friends. I became fascinated with the idea that one could [have] been brutally murdered by someone they are so close to. This friend had also been a suspect for another murder. The novelist knew full well what he was capable of, yet she still chose to stick by him and possibly even cover for him. These questions of loyalty and truth became the seed for my new play Broken Story.

How would you describe the main character of Jess?

Jess is a strong-willed, passionate young journalist who will stop at nothing to get to the truth. The story of the murder of novelist Jane Hartman is of particular interest to her because she’s had an obsession with Jane since she was a little girl. Jess’ desire to break this story gets mixed up with her own feelings about Jane and leads her into territory she was not expecting.

Do you feel the show offers commentary on the current state of journalism and society?

I think the show definitely parallels the issues surrounding the Harvey Weinstein case and the ability of people with influence and power to control and suppress the media. In rehearsals for the play, we discussed the real-life scenarios that accompany a high-profile story such as this one and even provided the actors with background research which included an article on NBC’s suppression of Ronan Farrow’s Weinstein story. It was not really my intention, but it turned out to be serendipitous that the Me Too movement preceded this play.

How long have you been developing this show?

Since the summer of 2016. We had two developmental readings of the play, one in 2018 and one earlier this year after which I made several re-writes. There were numerous drafts of this script. I solicited the assistance of two excellent dramaturgs, Vanessa R. Bombardieri and Linda S. Nelson. Their insights and guidance as well as that of the audiences who attended the readings was invaluable.

What’s it like to direct your own play? Pros? Cons?

It’s amazing! A dream come true. As a director, I write plays that I want to direct. I try to write plays that have a strong sense of rhythm, theatricality and that are challenging and exciting for both actors and directors to work on. I love the fact that if something is not working in rehearsal, as the writer I have the ability to change it on the spot! I feel that as both the writer and director I can realize my vision more precisely. It’s so rewarding when all the elements come together. Writing, directing, design, acting, etc. — true convergence. The only con I can think of is that it’s terrifying to be the writer on opening night! You never really know if your play is going to work until the audience is there. Incredibly nerve-racking!

Broken Story, written and directed by Cyndy A. Marion, plays through Nov. 16 at the Gene Frankel Theatre in New York City. The show comes to the Big Apple courtesy of the White Horse Theater Company. Click here for more information and tickets.