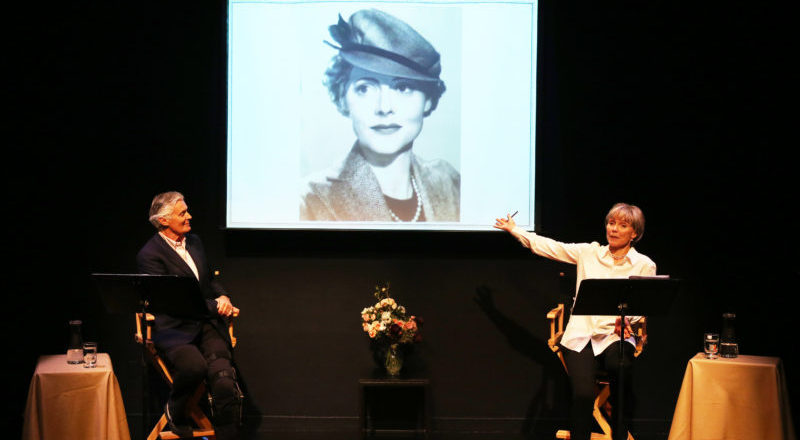 Celia Johnson, the English actor known as being the muse of Noël Coward and star of Brief Encounter, used to write moving and informative letters to her husband, Peter Fleming, while he was away during wartime in India. The back-and-forth missives between the two are now the basis for the play Posting Letters to the Moon, brought to life by their daughter Lucy Fleming.

Peter Fleming, brother to James Bond creator Ian, would write about his daring adventures in India, including escaping capture after a glider crash in the jungle. On the other side of the world, Johnson would write about rationing of food and her empty house after the children were evacuated.

The intrigue of the global conflict and the love of two people come through in these deeply personal letters.

Posting Letters to the Moon, courtesy of Jermyn Street Theatre, is currently playing the Brits Off Broadway festival at 59E59 Theaters in Midtown Manhattan. Performances run through Sunday, June 2.

Recently Hollywood Soapbox exchanged emails with Lucy Fleming about the old letters and the new play. She performs in the show with her real-life husband, Simon Williams. Questions and answers have been slightly edited for style.

What were some of the most interesting revelations you found in the letters between your parents, Celia Johnson and Peter Fleming?

The depth of their love and the bravery they showed each other from thousands of miles apart, the jokes they sent each other to keep their spirits up, their optimism throughout the five years of World War II when nobody knew who was going to survive, the way they dealt with the deprivations of rationing of food, petrol and clothes. I had no idea how difficult life was for them. I loved discovering their mutual admiration for how they each were coping in such difficult times.

Do you believe they expressed universal themes that the audience will be able to appreciate and learn from?

Today communication is so easy and varied, but during the early 1940s there were only letters and maybe a rare telephone call — no television and a very basic news service on the radio from the BBC. I think the audience will appreciate how different life was in those day, very simple really.

My parents sent silly jokes to each other to mask the seriousness of everything that was going on around them: the fear of invasion, the Blitz, etc. I hope the audiences will enjoy the letters as we do.

They just kept going in all circumstances. They didn’t complain. My mother learned to drive a tractor and became a policewoman to help the war effort. Life was anxious and restricted, but they just got on with it. I think the audience will appreciate the English stiff upper lip!

What’s it like to act on stage with your husband, Simon Williams?

It’s great fun working with Simon. He can be wicked if I stumble or get a bit emotional, but he reads my father’s letters brilliantly and is very handsome. We have worked together on film as well as stage. He is a great support.

Did you immediately see a play within these words? What convinced you they would work on stage?

No, I didn’t know quite what they were going to be, but I knew they were beautifully written, fascinating, funny and told the story of living through a world war.

I also wanted people to know more about my mother — other than as an actress in Brief Encounter. I thought people would be interested to hear her thoughts while filming with Noel Coward and David Lean.

My father was in deception (as was his brother, Ian Fleming, who created James Bond). He couldn’t always say what he was doing, so he wrote phrases that my mother would understand — but not the Germans who might intercept the letters.

The letters tell a love story, and people like love stories.

Posting Letters to the Moon, starring Lucy Fleming and Simon Williams, is currently playing the Brits Off Broadway festival at 59E59 Theaters in New York City. Click here for more information and tickets.